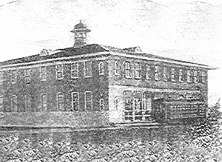 In 1902 a call was issued by some of the local businessmen for a meeting of those interested in the formation of a yacht club.  The call was being led by John J. Kennedy who urged the organization to join the Southern Gulf Coast Yachting Association in 1903.  Captain Jones was elected its first Commodore, with Kennedy as its vice-commodore.  The Great Southern Hotel was its first headquarters until the completion of the 3-story annex at the end of the Port pier in 1904.  The Pavilion housed the Yacht

Club, a bowling alley and a large dance floor.  The handsome frame two-story building measured 124 by 110 square feet with a 20 foot gallery, extending along the entire length overlooking the Sound.  The first level accommodated an immense café encompassing the entire ground floor, walled-in by glass on three of its sides.  The upper floor had a large ballroom and gymnasium.  Also provided were separate locker rooms for men and women.
The mile distance into the Sound was reached by a trolley which ran from the Union Depot to the end of "The Pier".  Shaded rest stops were provided with seating at several intervals along the car track where individual parties could be let off to roam around or walk the plank walk-way.  Water craft and launches were available for rent or hire for fishing and excursions to the nearby islands.  The Pavilion remained the social center for Gulfport until it burned down at 11:00 p.m. on June 27, 1909.
At Gulfport's first Regatta in July of 1903, all the Gulfportian yachtsmen were easily distinguished by their dress attire in full yacht club uniform.
Following World War I, in 1919, all of the yacht clubs adopted the Fish Class One-Design sloops for competition.
Years after the original yacht club was destroyed by fire and yachting had faded out with those burned embers, a handful of sailing enthusiasts assembled at Captain Manzey's wharf on West Pier.  During 1932, they initiated match races using under-seventeen-feet catboats.
The next year, in 1933, a group of young men formed the Gulfport Yacht Club.  Some of the first members were: James Todd as commodore, Ashton Hardy, G.B. Flagg, Arvah S. Hopkins, Oscar F. Cassibry, Felton Ladner, and the Alfonso brothers -- Tut, Gus, Andy, Joe, Carl, Nathan, and Vincent.
The Gulfport Yacht Club was officially chartered on September 7, 1934.
At that time, the club owned a small pier which extended from the Port's West Pier.  There were so many spectators for one of the first regattas, that the yachting pier overturned and sank.
Arvah Hopkins became commodore in 1934 when the club was admitted into the Gulf Yachting Association with membership of almost 200.  The third annual regatta in 1935 was even larger than those of 1933 and 1934, with sixty-five boats taking part.  The races were started from a club-built pier off the west steamship docks.
In 1936, Vincent Alfonso designed his own racer, which was a small catboat.  It

became a hit with the other club members and before the end of the year's season, eight Alfonso Racers were competing with each other.
Young ladies also participated by forming the Gulfport Skipperettes.  They were a hard-working group who won the Biloxi Yacht Club Race Week trophy and also captured honers in the Gulfport regatta.  Regular intra-club Fish Class skipperette races began expanding and as a result, the club was energized by having one of the largest skipperette organizations in the association.
In 1937, the new Yacht Clubhouse was dedicated and Gulfport hosted the Lipton Regatta.  Membership rose to exceed 500.
At the Fourth of July annual regatta, eighty-two boats entered the competition, ranging from the small Alfonso racers to the large schooners of the Southern Yacht Club fleet.  The inner harbor was filled with sail craft and pleasure yachts.  It was an exciting and colorful race pageant.
With World War II, the yacht clubhouse was taken over by the Coast Guard, Navy and the Army for purposes of coast patrol, air-sea rescue and training units.  After the War, in May 1946, the clubhouse was returned to its membership.  During the following year of 1947, a hurricane washed away the clubhouse leaving only the foundation and the flag pole.
A Jahnke crew house-boat was loaned for a year until a WWII surplus building was moved in from Gulfport Air Field as a temporary clubhouse.
In 1948, Commodore George Hopkins, Sr. urged the promotion of the Lipton Regatta, during which Gulfport won the famed Trophy for the first time
In 1956, Commodore Finley B. "Goat" Hewes, Jr. acquired three acres on East Pier for a new Yacht Club facility and was instrumental in raising much of the needed funds to build the clubhouse.  As a result, he was honored with lifetime membership.
In 1969, the Race of Champions was won by Donald Sutter during the 35th annual Sugar Bowl Regatta held on Lake Pontchar-train.  Once more the Gulfport Yacht Club lost its clubhouse due to Camille, the worst storm to hit the coast.  However, the marina received little damage and a new facility was built atop the existing piling.  The new facilities were dedicated in 1971.
The first annual Gulf Yachting Association's 200-mile race was started from the Gulfport Yacht Club harbor in 1970 with a turnout of approximately 50 boats.
In the early 1980s, the membership approved the purchase of the clubhouse property and expansions included larger dining facilities, a sailing office, committee rooms, enlargement of the Snack Bar, and a paved parking lot was laid.
The Gulfport Yacht Club sports one of the most distinguished trophies.  It is known as the Commodore Arvah S. Hopkins memorial trophy in commemorating Hopkin's influence on the success of Gulfport's yachting activity.
In 1983, the Chrysler Laser World championship was sponsored by the Gulfport Yacht Club.  It was the first time the world class regatta had ever been held in the United States and was sailed October 13-29 of that year.  About 147 sailors from 25 countries made it to the competition.
As of 1998, the GYC had 705 voting members and 225 non-voting, while maintaining an inventory of 8 Flying Scots, 14 Optimists, and two 420s.
Puchase this Book by going to DanEllis.